Traditionally my blogs have been made up largely of utter nonsense.  Goofy stuff to make people laugh, because that type of writing is an easy way for me to blow off steam, such as my series of “Revisionist History” lessons (which I’ll plan to repost here in the near future).  But today I wanted to get serious and write about an issue that many view as political.  But what right does a fiction novelist have to go blabbing about his political views?  Is it the same as, say, a professional athlete?

A large and very vocal crowd has lately been demanding that athletes and entertainers refrain from speaking publicly about politics.  But why?  Are athletes not citizens?  Aren’t entertainers voters?  Isn’t a citizen forming and sharing his political views without fear the most American of our ideals–the backbone of democracy?  And besides, nearly half the country voted to elect a reality TV star as our nation’s leader, so deep down I suspect they don’t actually believe in their protests anyway.  They simply don’t like a prominent athlete with legions of fans saying something with which they don’t happen to agree.

So I want to talk about gun control.  Not sweeping, “he’s coming for our guns” bans or anything, but some common sense measures that really shouldn’t be a major imposition to any regular citizen.  One popular idea being lobbied is to reinstate a ban on assault style weapons such as the AR-15, the weapon used in recent mass shootings at Parkland, Las Vegas, Orlando, and Newtown.

Proponents of a ban on weapons of this sort claim that there is no legitimate reason for ordinary citizens to own military-style guns like these.  They predict fewer mass shootings if the government institutes a ban on selling them.  Opposing arguments run the gamut from claiming these weapons are vital to a citizen’s right to protect themselves, to the fact that the vast majority of gun deaths are not caused by these weapons, to the suggestion that banning them violates the cherished ideals of our country’s Constitution.

Mass shootings have become embarrassingly frequent in this country, and they inject strong emotions from both sides into the gun control conversation.  Making changes to something as historically and symbolically important as the Constitution evokes vigorous emotional reactions from many Americans as well.

But what if we laid aside the emotions for a moment and had a conversation about mass shootings based solely in logic and rationality?  Although it seems a broad portion of our citizenship now views facts as debatable or insignificant, let’s try taking a closer look anyway.

I’m not going to discuss the comparisons that gun control advocates like to make between rates of gun violence in the U.S. with those of countries that have strict gun control laws, such as Australia, because I’m not talking about all gun violence.  I’m focusing solely on mass shootings, and the fact is that banning assault weapons has cut down on these horrific events in the past, so there is sound logic in predicting that it would work again.

A federal ban on assault weapons was the law of the land in this country from 1994-2004. California senator Diane Feinstein, the main architect of the bill, spearheaded the issue after a mass shooting in San Francisco.  She unambiguously explained, “The goal of the ban was to reduce the frequency and deadliness of mass shootings.”

The law included a ban on 18 specific models of assault weapons, as well as a ban on any firearms containing certain military-style features, and it also prohibited high-capacity magazines capable of holding more than 10 bullets.  And you know what?  The ban accomplished precisely what it set out to accomplish.  The frequency and severity of mass shooting casualties dropped.

According to a study conducted by UMass researcher Louis Klaveras (which echoed similar studies by other research journalists), incidents of mass gun violence–defined as involving 6 or more deaths–fell significantly during the ban, and then rose dramatically after the ban expired in 2004. 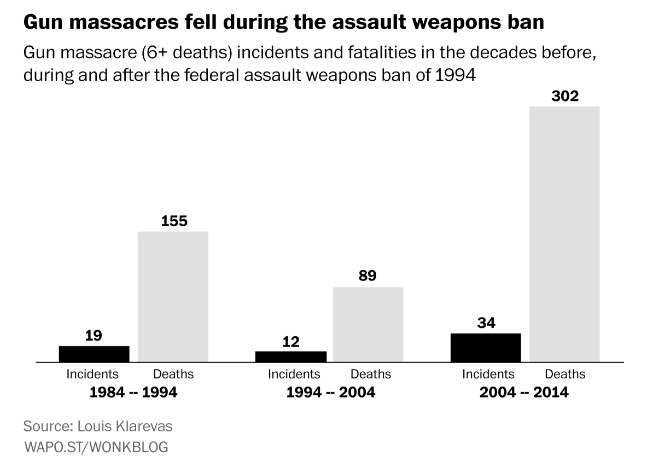 These facts appear to make a strong case for the logic of the argument to reestablish the ban.  If the public cannot legally purchase weapons that enable them to quickly fire large amounts of ammunition without reloading, then it will be much more difficult to carry out a mass shooting of the magnitude we’ve seen all too frequently lately.  The data shows that this approach reduced the problem before, so there’s no reason not to assume it will work again.

Let’s look at the other side, those arguing passionately that no steps should be taken to limit access to assault weapons.  The first thing they usually say is that it’s a mental health issue, not a gun issue.  Wrong.  It’s both.  Lack of proper mental healthcare is a humongous problem in this country, but it’s not the one I’m addressing in this article.  Easy access to weapons capable of mass chaos may not be the entire problem, but it’s part of the problem, and when we’re in crisis mode, why in the world would we be unwilling to take any part off the table?

Detractors’ arguments typically point out that perpetrators will still buy guns illegally, so there is no reason to alter the laws in place.  This seems like flawed logic, akin to saying that rape is illegal, yet rapists still rape, so why even outlaw it?  In reality, the mass shooters of recent history had no ties to the criminal underworld, no intricate knowledge of the black market.  They were just ordinary citizens struggling with mental illness who would’ve found it much more difficult to carry out their evil plans had they not been able to easily get their hands on a weapon of mass destruction.

“This seems like flawed logic, akin to saying that rape is illegal, yet rapists still rape, so why even outlaw it?”

Another argument against banning weapons like the AR-15 is that they are necessary to a citizen’s ability to properly defend what’s his.  As journalist David French wrote on nationalreview.com, “if gun-control measures ‘freeze’ the nature and types of guns that are lawful for civilian use, even as broader gun development proceeds apace, there will be an ever-widening gap between the capacity of a criminal to do harm and law-abiding citizens’ ability to protect themselves from that harm. It will also lead to such a yawning gap between citizen and state that private gun ownership no longer provides any meaningful deterrent to tyranny.”

It is true that there have been no shortage of factual instances of crimes being thwarted by ordinary citizens with firearms, including a recent one where an Illinois man named Dave Thomas stopped a knife-weilding man attacking a neighbor by threatening to shoot him with an AR-15.  When interviewed, Thomas suggested that the “less-threatening-looking” hand gun he almost reached for to confront the attacker might not have intimidated him enough to scare him off.  Like many of the arguments from pro-gun advocates, this seems a bit far-fetched to me.  I just don’t buy the probability that anyone with a knife would think he could get the better of someone with a gun.  Any gun.

In that vein, let’s go back to the points French made.  The scenario he describes in the article involve a home invader who’s armed with an assault weapon, while the resident is “at a disadvantage” of being able to shoot only 10 rounds without reloading.  The scenario assumes that a criminal will undoubtedly be in possession of an illegal assault weapon, while the homeowner is armed only with “a less accurate weapon.”  Readers, does this sound like your reality, or a Bruce Willis movie?  I’ve already discussed the flawed logic of assuming your average lawbreaker will have access to black market weapons.  So let’s try and imagine a scenario where you’d literally be at a disadvantage having only ten rounds.  Either 11 or more guys are breaking into your house, or they’re connected to organized crime or a well-funded street gang and are better armed than your local police.  I’ve lived in some tough neighborhoods, but honestly, I just can’t see it.  If more than ten intruders pick your house to break into, it must be the jewel mansion of the neighborhood, and you can probably afford private security.  If they’re mob-types, they’re not going to stop and run when they catch sight of you with a single AR-15.

Which brings us to the penultimate argument from the anti-gun-control crowd: It would violate the very essence of the 2nd Amendment, because the citizens will be armed with weapons that don’t even approach the firepower of the military.  They say that a well-armed public is a strong deterrant to a government up and deciding to go into tyranny-mode on its people.  On the surface this seems solidly rational.  Of course, the logical conclusion to that type of thinking would end up with citizens needing to be allowed to buy bazookas, tanks, and fighter jets, simply because the government’s army has them.  The gun rights advocates will say that’s a gross exaggeration of their point, but is it?  Remember, when the 2nd Amendment was written, there was no professional police force in existence, and memories of taking up arms against King George’s armies were fresh in everyone’s minds.  But America has evolved.  The government, as dysfunctional as it often appears, still operates within a system of checks and balances that makes a Saddam Hussein-style takeover extremely unlikely.

So, as socially unpopular as it seems to have become, let’s all take a deep breath and look at this issue logically and factually.  Gun enthusiasts aren’t cold blooded fiends who shrug off the deaths of innocent people.  They’re simply operating under the very understandable fear that if they give an inch, the anti-gun contingent will take a mile and they’ll lose all their gun rights.  But those calling for an assault weapons ban aren’t Constitution-haters that simply want to spoil your fun.  All of us need to remember that we don’t live in a video game or a Jason Bourne movie.  What we do live in is a country where mass shootings have heart-breakingly become the norm, and it simply doesn’t have to be that way.  If there’s anything we can do that might help even a little bit, we need to come together and make it happen.